Located just outside of Washington DC, the urban village of Falls Church, which is nicknamed “The Little City” due to it’s tiny footprint of 2.2 square miles, has a list of robust amenities and a lively nightlife. Falls Church is an excellent place to live with a low crime rate and excellent schools. Below you will find some of our favorite things to do when we are lucky enough to spend time in Falls Church, Va.

Cherry Hills Farmhouse is built in the Greek Revival Style and has been restored and converted into a museum. The property provides educational programs for students and the girl scouts to learn what life was like for a young person in the mid 19th century including proper tea etiquette and a formal tea that they get to enjoy afterwards. Cherry Hills Farmhouse also provides teas during special holidays such as Valentine’s Day which are open to the public otherwise private teas may be scheduled throughout the year.

Located in the middle of Falls Church is the East Coast’s largest Vietnamese commercial center. The center began its life as the Plaza Seven Shopping Center 40 years ago. Now it is known as The Eden Center and has more than 120 restaurants, shops and businesses which cater to the Asian-American population and is a major tourist destination. The center’s clock tower is an exact replica of a clock located in downtown Saigon. The clock was erected as a reminder of home to the thousands of immigrants who shopped/lived here. Today, the Eden Center is just as important to the younger generation who spend their time here. An elaborate Lion Arch was added as a gateway entrance off busy Wilson Boulevard to honor both Vietnamese and Chinese cultures that are reflected in both Eden Center’s shops and its customers.

The W&OD is a 45 mile long trail that runs along what was once a railroad. The paved trail begins in Shirlington and ends in Purcellville with a couple of miles running east to west through Falls Church. The path has paved hiking & biking trails, fitness stations and an equestrian trail. 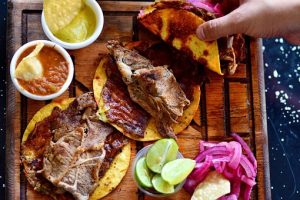 The incredibly popular Taco Bamba is owned by chef Victor Albisu. Albisu is a Le Cordon Bleu trained Chef whose food is a reflection of his Cuban and Peruvian roots and a unique take on Mexican fare.

Opened in Falls Church in 2012, the restaurant is an ode to the grilled cheese sandwich. They have regular grilled cheese and specialty sandwiches which can be made vegan. They also have their own special totchos (basically tater tot nachos). This restaurant is every kid’s or kid at heart’s dream restaurant.

Audacious Aleworks is a small craft brewery that has 15 types of beer on tap at all times. The beer menu rotates regularly. They are family friendly and customers can order grilled cheese, beer brats and pretzels from their kitchen or you can bring your own food with you.

The Casual Pint of Falls Church

The Casual Pint has the best selection of local, regional and national beer available. Served in a casual, friendly atmosphere by knowledgeable “beertenders” it is a great way to spend an evening.

This small cafe and specialty coffee roaster located in Falls Church celebrates the uniqueness in all of us. Enjoy a high quality coffee while spending time in their friendly, comfortable cafe.They have seating available both indoors and outdoors.

Franklin Forest/Franklin Park is one of the wealthiest communities in the nation and residents have a high level of education with over 50% of the residents with a Masters degree or higher. The homes in this area are mostly larger, single family homes. Love attending gallery openings, the opera or ballet? Then you will feel right at home living in this neighborhood. The neighborhood is a culturally diverse mix of people with Asian, Irish, English and German ancestry.

Hillwood’s homes are made up of small to medium sized apartments and single family homes with a mix of renters and homeowners. The majority of homes in the area were built between 1970 and 1999. Many of the  people living in this neighborhood have earned at least a bachelor’s degree. If you prefer to commute via train or bike then you will love this neighborhood because 24% of your neighbors commute as well.

This suburban neighborhood is made up of medium to large sized single family homes. Most of the homes in Lake Barcroft are older, well established and built between 1940 and 1969. If you live in this neighborhood then your neighbors will consist of executives. Lake Barcroft has the distinction of being one of the few neighborhoods in the US that consists of 100% detached single family homes. Because the majority of homes were built between 1940 and 1969 the look and feel of this neighborhood harkens back to an earlier time.

The town of Falls Church is one of those rare places that looks like a small town but feels like a city. With it’s close proximity to DC and plenty to do, you can’t go wrong living in this small town. What neighborhood will you choose?